A man goes to see the star attraction at a freak show part-owned by his old classmate, Silkey Travis.

(from The Worlds of A.E. Van Vogt)

The animal that sat in an armchair on the dais was about five feet long and quite slender. It had a cat’s head and vestiges of fur. It looked like an exaggerated version of the walkey-talkey animals in comic books.

At that point resemblance to normalcy ended.

It was alien. It was not a cat at all. I recognized that instantly. The structure was all wrong. It took me a moment to identify the radical variations.

The head! High foreheaded it was, and not low and receding. The face was smooth and almost hairless. It had character and strength, and intelligence. The body was well balanced on long, straight legs. The arms were smooth, ending in short but unmistakable fingers, surmounted by thin, sharp claws.

But it was the eyes that were really different. They looked normal enough, slightly slanted, properly lidded, about the same size as the eyes of human beings. But they danced. They shifted twice, even three times as swiftly as human eyes. Their balanced movement at such a high speed indicated vision that could read photographically reduced print across a room. What sharp, what incredibly sharp images that brain must see.

Like a lot of the Van Vogt stuff I’ve read, this story was kind of deadpan in its humor and straight-faced in its insaneness. For instance, where does the name “Cataaaaa” come from? According to the story, the crowds see the cat creature and instantly say “Aaaaaa.” Pretty goofy, even for a story about [SPOILER] a cat alien who comes to Earth to finish some sort of school project that requires him to reveal his mission to a human. I assume the philosophical discussions about the limits of atomic energy in spaceships, “rhythmic use of energy” for space travel, life, the universe and everything are extra credit. I wouldn’t be surprised if the Futurama people had this story in mind when they dreamed up Nibbler and his fellow Nibblonians. 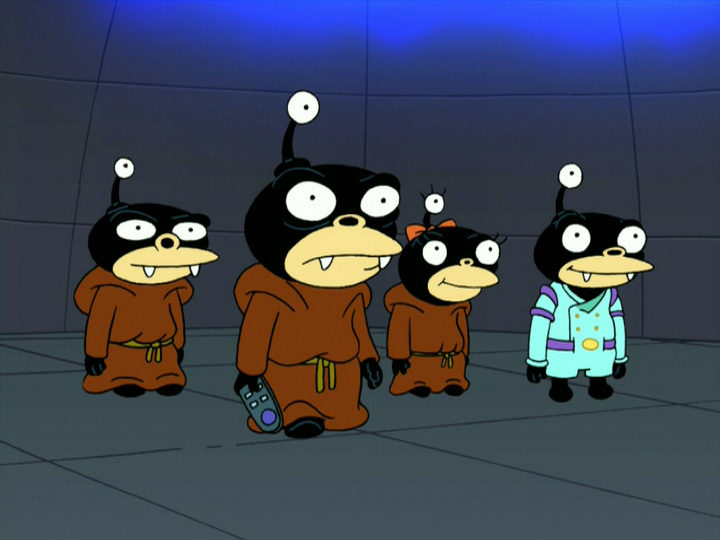