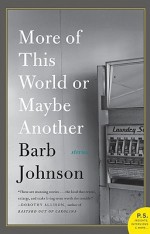 (from More of This World or Maybe Another)

Junior’s scratching his nuts, following Luis with his eyes. His head jerks on its neck like a sprinkler that can only turn a little at a time. What a moron. He probably couldn’t make a science project or pass catechism, either one. Luis tries to picture Junior in a suit and tie or hooking up a radio at the science fair. What a joke.

This story did not please me. It felt too much like a story. It felt made up. I was also confused by this sixth grader who was getting confirmed at age twelve. I was confirmed when I was sixteen and I did not get slapped afterward, as the priest said Luis would (does this happen anywhere, ever?) There’s also the fact that Luis is regularly having to give Junior, his mother’s boyfriend, blowjobs. This act is treated very casually and doesn’t seem to bother Luis, or it bothers him about as much as Junior always having control over the TV remote. I don’t know. I know he’s a poor kid who is limited by his circumstances, but it felt like the writer treated him like an idiot. Like he wouldn’t know that giving blowjobs was a big deal or like he’d really believe he could escape his life by putting his pilled-out mother in an abandoned car and driving her to California because God would make him a man post-confirmation. I’m going to try a few more stories in this collection, though. This is the last one in the book, and maybe I would have liked it more if I’d read it straight through.

Read some of it here.