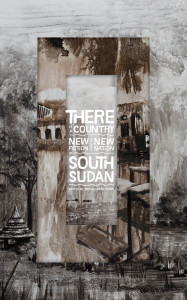 A man must flee his village before the faceless ones come for him.

(from There Is A Country: New Fiction from the New Nation of South Sudan)

The half moon was sinking slowly behind the dark rain clouds. The dreamy shadows melted into the dark corners around the compound like a blanket had been spread over them earlier. In one corner of the compound, four tiny lights were shining. They moved. Black cats.
I stood at the door to my hut. The night was still early, but the town had already gone to sleep. There was no public electricity and the few privately owned diesel generators in the neighbourhood had gone silent. It was very quiet. The children who had been singing in the compound next door had retreated to their homes. The night had come. I knew they would come for me one day. And when they do that night, I would be ready for them. “They” and “them” have no faces, but I had a fair idea who they were.
Juba 1991. It was a bad time for the citizens of the besieged town. The civil war had come to Juba for the first time. The town had been shelled several times. Citizens could hear the rumblings of heavy guns and fighting outside town. Casualties were being brought in as the army were witnessing heavy loses in battles. They had become jittery. And nobody knew the casualties on the rebel side.

This anthology came with the latest McSweeney’s, and it’s a damn cool idea. It’s not often you get to read the work of authors from a fledgling nation just now building its identity, and this first story from the collection is a strong one. Where What is the What — a book I cannot recommend enough — put the marauding muralhaleen (I think I have that right) in concrete terms, this swiftly moving story keeps the reader very much in the dark. All we know is that they’re fast, brutal and nocturnal predators. Frightening stuff.

(You can read this story here, but it’s pretty ugly compared to the anthology.)