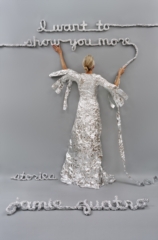 An elderly woman attempts to deliver a letter to the post office.

Sometimes she forgot and said she didn’t know where the sweater came from, and when she said this, it was as true as when she told the story about the dead son. She wasn’t always sure if the thing had actually happened or if it was just something she read in a book. When she told the story, she felt she had not even known the boy in the jungle; she told it without emotion, as if describing a scene from a stage play, the boy who stepped onto the booby trap just an actor who was now carrying on another life somewhere.

This story authentically captures the perspective of an eighty-nine-year-old woman who sets out on a walk to the post office. She is carrying an anti-war letter in her pocket and keeps feeling for it to remind herself of her mission. There are some really beautiful moments here, particularly when the woman thinks of her son: “She felt certain that, were she able to kiss his cheek, she would remember how to feel sadness and grief, love and longing.” This sentence makes me happy to be able to feel–how lucky we are to feel. That being said, I was a little underwhelmed with the story as a whole. I felt like something was missing.

This story was originally published in The Antioch Review. If you have library access, you can read it at JSTOR. Otherwise, you can read a small portion of it here.