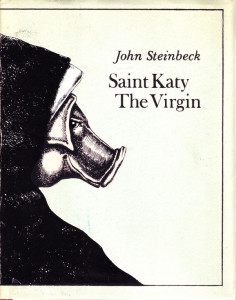 An evil pig raised by cruel man is converted to Christianity.

When you think of the low, nasty kind of laughter it was, you’ll see what a bad man this Roark was, and you’ll not be surprised that he didn’t pay his tithes and got himself talked about for excommunication. You see Roark didn’t have the proper kind of a face for a laugh to come out of. It was a dark, tight face, and when he laughed it looked as though Roark’s leg had just been torn off and his face was getting ready to scream about it. In addition he called people fools which is unkind and unwise even if they are. Nobody knew what made Roark so bad except that he had been a traveler and seen bad things about the world. You see the atmosphere the bad pig, Katy grew up in, and maybe it’s no wonder.

What the hell did I just read? This did not at all remind me of the John Steinbeck whose Grapes of Wrath bored me and Of Mice and Men puzzled me in grade school. I don’t remember those books being funny, or much fun. Those well meaning teachers would have done better to start with this story, ’cause there’s no way I wouldn’t have enjoyed this (parodic? satiric?) story of a vicious pig converted and anthropomorphized by the two priests she chased into tree as a last ditch attempt to save their lives. Insane. This story is insane.

This is from McSweeney’s Hitchcock and Bradbury Fistfight in Heaven issue, in which old genre fiction collected by Alfred Hitchcock and Ray Bradbury are reprinted, along with some recent, likeminded works. “Saint Katy the Virgin,” of course, is an example of the pig-finds-religion genre. Other examples are forthcoming. Most bad pigs stay bad. Learn more about the story, and see where I found that amazing book jacket art, here. I could not find a place to read “Saint Katy” online, which is pretty remarkable for a story first published in 1936.