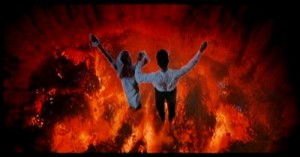 A divorcee ditches dream control camp to wander around a resort at the edge of a volcano.

I’ve been thinking about volcanos recently, probably after listening to this edition of The Straight Dope. Among other things, the podcast/article pointed out that bubbling open-faced volcanos — a la Joe Vs. The Volcano — do not exist in the natural world. Which means this hilarious bit by Kyle Kinane about how to barbecue via volcano is kinda moot. But it’s still a very funny take on insomniacal brain rampages, which this story is concerned with as well.

In Lawrence Osborne’s story, the volcano is just a glowing, restless thing in the distance, probably a metaphor for something or other (aging, sexual unrest, inescapable everyday life, whatevs). Martha never puts the metaphor into words, but she can’t take her eye off the volcano, and it draws her to it in one of those literary ways you just have to put up with. We’re privy to her agonies over where she is in life, and how much she dreams and thinks about “phalli,” but when she decides to rent a Vespa and take a mini-vacation from her vacation, her though process is suddenly smoky. Why does she do it? Because she does. Which is, yeah, the way dreams tend to work: We become observers to our own actions.

Of course, one of the many things this story concerns itself with is dream control. Martha takes a drug that a self-styled Hawaiian dream guru says makes it easier for people to control and remember their dreams. And while Martha escapes this new agey adventure early on, it doesn’t leave her thoughts. So, are we supposed to think her trip to the volcano resort was just another dream? I don’t think so, but there’s room for doubt. This is a strange and beautifully written story. Unpredictable, too.