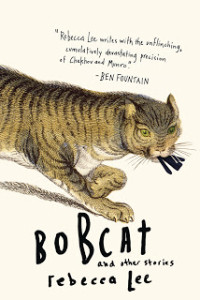 A college freshman faces a tough call: Will she admit to her sin of plagiarism or double down?

(from Bobcat and Other Stories)

“You seem fully immersed in a study of oppression. Any reason for this?”

“Yes, that’s right. And you say here — a shocking line — that a language must sometimes be repressed, and replaced, for the larger good. You believe this?”

“You think that the Eastern-bloc countries should be forced to speak, as you say here, the mother tongue?”

Some parts of the paper I had just copied down verbatim, without really understanding, and now I was stuck with them. Now they were my opinions. “Yes,” I said.

“You know I am from that region.”

“Whereabouts in Poland?” I asked conversationally.

“I was born on the edge of it, in the dark forest land along its northeastern border, before the Soviet Union took it over completely, burning our towns. As children we were forced to speak Russian, even in our homes, even when we said good-night to our mothers as we fell asleep.”

This was turning into a little piece of bad luck.

Okay, the title track was good, but now I’m starting to see why this collection is getting such sweet airplay. “The Banks of the Vistula” is marvelous. It’s fierce and pushy. Unpredictable, yet constantly tempting you to guess. It encourages distaste for the moral absolutist and endears you to those who’ve bent their ethics in order to survive. It kinda sorta makes you hate good people and respect bad ones.

This ran in The Atlantic in 1997, apparently. You can read it here.