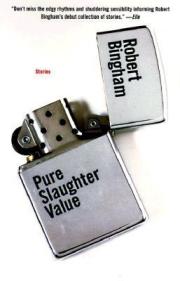 Max and Amanda go to Chicago for a wedding during a heat wave.

He had time yet, and so he walked down Michigan Avenue until he ran into the hotel his great-uncle had built. Max crunched a Tic-Tac and walked into the lobby of the Drake Hotel. His grandfather had never gotten along with his only brother, the mastermind behind the Drake. Max’s branch of the family had trouble with the Chicago branch. They rarely visited anymore. For Max, the Drake was a source of bitterness. In the bar he’d once had a disgusting fight about money with his father. Never mind, the hotel had been sold to a chain and none of the proceeds had spread laterally to his father, not that his father would have given Max a cent if it had.

This is the first story in Bingham’s collection, Pure Slaughter Value, which was published in 1997. Bingham also wrote a novel, but he overdosed a few months before it was published. Most people probably recognize his name from the PEN/Robert W. Bingham Prize, which “awards $25,000 to the most exceptionally talented fiction writer whose debut work represents distinguished literary achievement.”

Onto the story: I didn’t love it. It ended too abruptly for me. It seems like he stopped just as things were getting going. There was also a whole lot of talk about the heat wave and people dying and I didn’t see what it was doing on a story-level. I like the voice here very much, though. It’s very Jay McInerney/Bret Easton Ellis. I couldn’t find a link to the story online, but here’s some guy’s take on it.