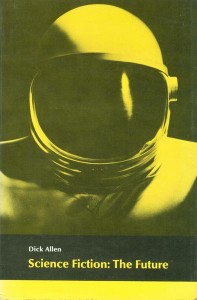 It’s the future so it’s no big deal when a 187-year-old Don marries underwater man-turned-serpent-lady Dora. Marriage, of course, is a data-sharing transaction.

(from Science Fiction: The Future)

How angrily you recoil from the page! You say, who the hell wants to read about a pair of queers? Calm yourself. Here are no hot-breathing secrets of perversion for the coterie trade. In fact, if you were to see this girl you would not guess that she was in any sense a boy. Breasts, two; reproductive organs, female. Hips, callipygean; face hairless, supra-orbital lobes non-existent. You would term her female on sight, although it is true that you might wonder just what species she was a female of, being confused by the tail, the silky pelt and the gill slits behind each ear.

Now you recoil again. Cripes, man, take my word for it. This is a sweet kid, and if you, as a normal male, spent as much as an hour in a room with her you would bend heaven and Earth to get her in the sack. Dora (We will call her that; her “name” was omicron-Dibase seven-group-totter-oot S Doradus 5314, the last part of which is a colour specification corresponding to a shade of green)–Dora, I say, was feminine, charming and cute. I admit she doesn’t sound that way. She was, as you might put it, a dancer. Her art involved qualities of intellection and expertise of a very high order, requiring both tremendous natural capacities and endless, practice; it was performed in null-gravity and I can best describe it by saying that it was something like the performance of a contortionist and something like classical baflel; maybe resembling Danilova’s dying swan. It was also pretty damned sexy. In a symbolic way, to be sure; but face it, most of the things we call “sexy” are symbolic, you know, except perhaps an exhibitionist’s open clothing. On Day Million when Dora danced, the people who saw her panted, and you would too.

This “instant classic” is from 1966, but it escaped my attention till today, when I found it in this sharp-looking anthology from 1971 which I picked up for a buck from a local book shop getting ready to go under. How awesome is that cover? Mr. Pohl, I’m sorry to learn, just passed away in September. Surely this wild tale of “modern” love between a spaceman and a transgender waterwoman was fairly progressive when it was written, and it still feels that way today. The humorous narration and fanciful presentation remind me of certain old Loony Tunes cartoons, though I can’t think of any one in particular. Maybe the shorts I’m thinking of were themselves parodies of those “kitchen of the future” type stories (with Rube Goldbergian appliances)? I don’t know. This story is short, funny and all around awesome. You should read it.

You can read it here. You can watch a film adaptation here.