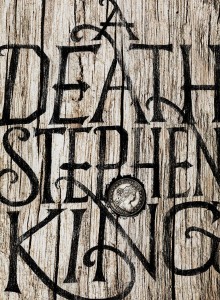 Police arrest the local idiot for the murder of a little girl, but he insists he’s innocent.

Jim Trusdale had a shack on the west side of his father’s gone-to-seed ranch, and that was where he was when Sheriff Barclay and half a dozen deputized townsmen found him, sitting in the one chair by the cold stove, wearing a dirty barn coat and reading an old issue of the Black Hills Pioneer by lantern light. Looking at it, anyway.

Sheriff Barclay stood in the doorway, almost filling it up. He was holding his own lantern. “Come out of there, Jim, and do it with your hands up. I ain’t drawn my pistol and don’t want to.”

Trusdale came out. He still had the newspaper in one of his raised hands. He stood there looking at the sheriff with his flat gray eyes. The sheriff looked back. So did the others, four on horseback and two on the seat of an old buckboard with “Hines Mortuary” printed on the side in faded yellow letters.

“Why are you here, Sheriff?”

It took me awhile to get into Stephen King. As a kid I remember thinking Salem’s Lot was a terrible slog; eventually I gave up and started flipping around looking for the dirty/scary parts. As an adult, I was too snobby. King’s prose left little to the imagination, I thought, overexplained every pointless detail. But still I continued on, mostly in audiobook form, because he’s fun as hell. Then I listened to his inspiring and I came to understand him as a writing always improving, always striving. It’s an amazing book.

And I started to notice something different about King’s writing, especially his newer stuff, and especially his shorter stuff. Am I crazy or is he getting better? “A Death” is a tightly written and surprising mystery story. It’s engrossing, and authentic in its frontier-town setting (at least, as far as I know). I’m not grading this on a curve; it’s genuinely great. And still fun as hell. Read it here.