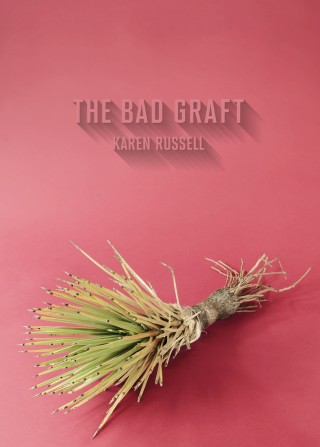 Angie and Andy visit Joshua Tree and something sinister gets into her blood.

The trip was a kind of honeymoon. The boy and girl were eloping. They weren’t married, however, and had already agreed that they never would be—they weren’t that kind of couple. The boy, Andy, was a reader; he said that they were seafarers, wanderers. “Ever unfixed,” a line from Melville, was scraped in red ink across the veins of his arm. The girl, Angie, was three years sober and still struggling to find her mooring on dry land. On their first date they had decided to run away together.

Andy bought a stupidly huge knife; Angie had a tiny magenta flashlight suspended on a gold chain, which she wore around her throat. He was twenty-two, she had just turned twenty-six. Kids were for later, maybe. They could still see the children they had been: their own Popsicle-red smiles haunting them. Still, they’d wanted to celebrate a beginning. And the Mojave was a good place to launch into exile together; already they felt their past lives in Pennsylvania dissolving into rumor, sucked up by the hot sun of California and the perfectly blue solvent of the sky.

Read the story before I spoil you.

Karen Russell remains one of my all-time favorites. It’s not just her sentences, though they are so, so pretty. (And it’s not that she let me interview her twice in two weeks when my digital recorder failed me a few years back.) It’s the way she surprises me all the time by sneaking hints of horror and sci-fi into what otherwise might be called high and mighty literary fiction.

“Hints” seems like the wrong word for a story about a malicious, sentient toxin entering the bloodstream through the pricking of a finger and corrupting its new human host/biological cul de sac. But, really, though the toxin appears to exist, and I feel like Scully just saying this, but what do we actually know about it? What evidence do we have?

Did it change Angie’s behavior? I dunno, man. She was probably pretty moody/flaky long before she got to Joshua Tree.

Yeah, but murder? Far as I know, she hasn’t murdered anyone. Sorry, Mulder.

And sorry, Andy. You just might need to die for me to believe this is an X-File. But I want to believe. When I read The Ruins I was rooting for the vines. 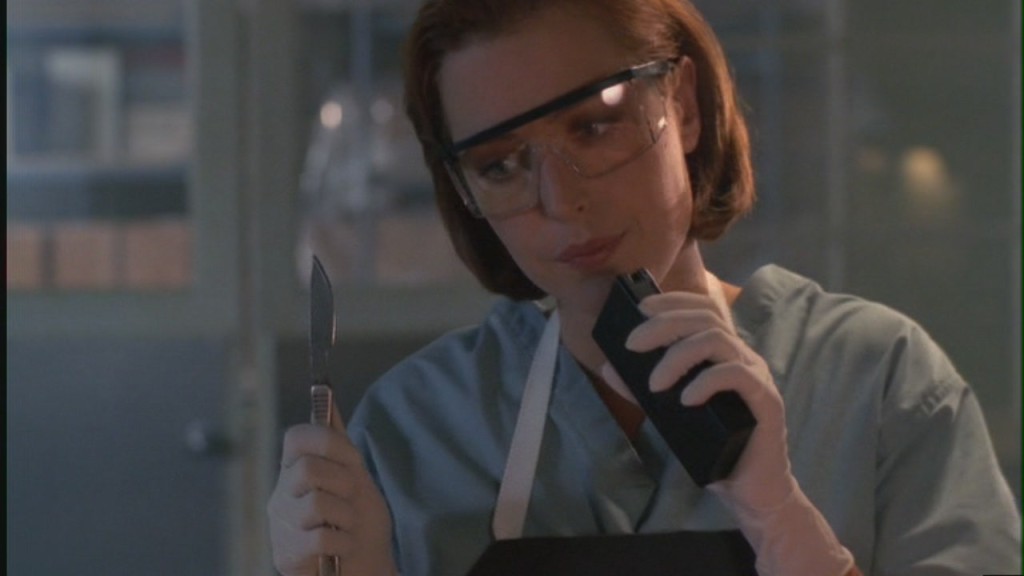 A widow sees an alligator outside her Florida retirement community.

The night I left Gerald’s body at the hospital I came home and cut my braid off, coiled the limp thing up like a length of rope, stuck it in a jewelry box, and shut the lid. Now I’m one more short-haired widow after whom nobody whispers.

I hope I never come across some lit class assignment on this story because I don’t want its metaphors splayed out in double-space to shrivel from overexposure. This is what it is: a well-written story about a woman in a sad place in her life in a sad place on the map who sees an alligator. Well, that makes it sound like an oil painting would have done the trick, but no. There’s a plot and scenes and depth. Good stuff. Carol, you woulda gotten along pretty well with Betty White’s Lake Placid character.

I couldn’t find this story online. My search method included googling the phrases “we don’t stay long at the cemetery” and “a gator crawled out of the lake today.” They got one hit and no hits, respectively. 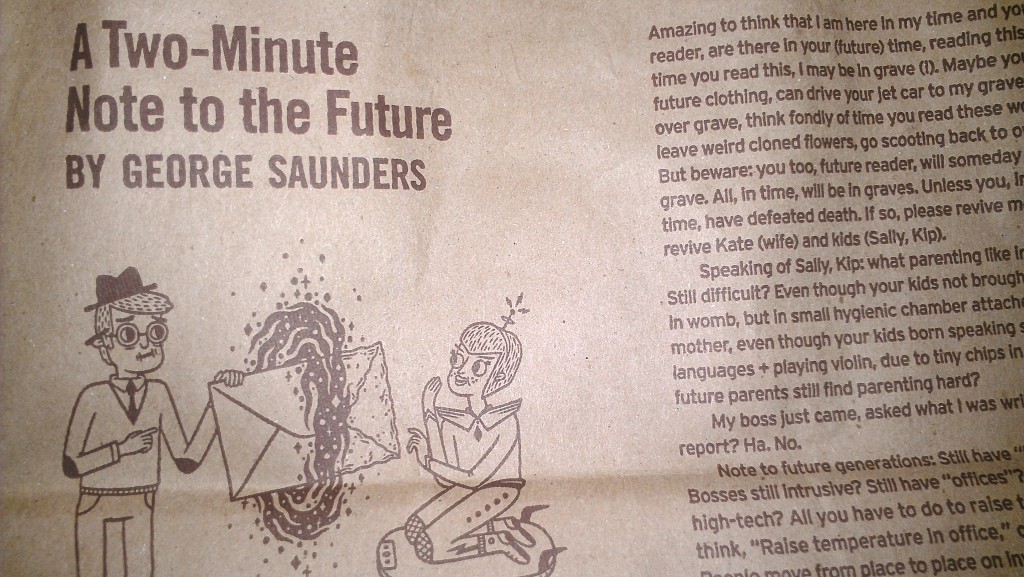 A present day office worker writes to his future counterpart.

(from a Chipotle bag)

I don’t eat much Chipotle, but when I do, it’s nice to get some George Saunders with it. Actually, my burrito was supposed to come with a smaller bag (featuring a piece by Judd Apatow) but I asked for a free upgrade. About the story: It’s decent. It’s short, of course. I like how the present day human speaks like a caveman. Kristyna Baczynski’s accompanying illos are very cool. The burrito was the usual: 50 percent food, 50 percent regret.

There are 125 days left in 2014. I kinda promised myself I’d read/write about 100 stories here this year, to mark I Read A Short Story Today’s 10th birthday. You know, because numbers. But I haven’t read any this year, as far as I can remember. It’s this damn Bolaño kick I’ve been on. His novels aren’t just thick, they’re dense, and thorough. His prose, translated into in English, is pretty in a brutalist way, and I find myself re-reading passage at the same time I marvel at their frustrating pace. Those dead women in 2666 nearly almost me. And I’m still reading The Savage Detectives — Kindle says I’m 84 percent done; so far, no detectives — and a couple other books of varying seriousness. But 125 stories in 100 days. I can do that right? It’s not Kilimanjaro. It’s just reading. If make the time, I’ll succeed. Lunch breaks and stuff. Okay. 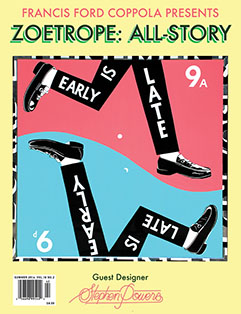 Johanna leaves town with a new dress and some stolen furniture to begin a life in the middle of nowhere with a man who isn’t expecting her.

The station agent would have said, without thinking about it, that he knew everybody in town. Which meant that he knew about half of them. And most of those he knew were the core people, the ones who really were ‘in town’ in the sense that they had not arrived yesterday and had no plans to move on.

This story is really long, longer than the average Munro story even, or the average Munro story that I’ve read. It’s also kind of confusing, like most of them, in that perspectives shift a lot and you have to read closely in order to keep up (and sometimes there is pronoun confusion because of this). That being said, it’s good. It’s really, really good.

It appears that the entire collection, of which this is the title story, is online. It was also made into a movie called Hateship Loveship (2013) starring Kristin Wiig. Rotten Tomatoes wasn’t crazy about it.

Anyhow, this story gave me all sorts of emotions. I felt hope and sadness and nervousness and all of these things I don’t often feel while reading, and which Alice Munro achieves because she’s a hell of a writer and she never hurries; she really takes her time. She gives us varying perspectives and stories within stories and stories within those stories and they somehow don’t feel out of place. She makes them all fit. Even the station agent has his say. I have no idea how she does it but it’s a pretty wondrous thing to behold. I won’t tell you how things turn out for Johanna, but I’ll say that you really ought to read it and find out.