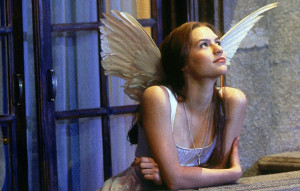 The lady all the librarians found interesting is murdered. Which is also interesting.

We called the bunny that lived in the children’s room Kaspar, as in Kaspar Hauser, but the children who came to torment and visit it thought we meant the friendly ghost.

Nobody saw the murder coming, which is how murder works. I certainly didn’t see it coming. I thought this would be a lower-stakes story for some reason, though starting with the library’s trapped and frightened pet rabbit should’ve been a clue. This might be my favorite story in Thunderstruck so far. It’s probably the least neat and the most paranoid, which might be part of it. I like what the L.A. Times wrote about it:

In “Juliet,” a group of small-town librarians commune in mourning over the shocking murder of one of their patrons, whom they’ve nicknamed Juliet. They comb through checked-out library books and try to piece together evidence through library gossip: “She knew someone was after her… [She] had once asked for a book that would tell her how to keep people out of her house.” The librarians insert themselves into Juliet’s death, claiming a sense of ownership over her. They want to be a part of the story. They want their feeling of loss to make sense.

I’m sure we’re all getting tired of me just posting every so often about about how Elizabeth McCracken is awesome, but what can I do? She is. And, even with the extension, this book’s due back to a real-life library soon, so I’m going to keep marching through it. 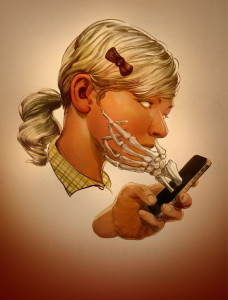 A young woman who takes a lot of selfies leaves behind clues to her terrible fate.

In one of the last pictures I am running. I am running down the street and it is dark, the street lamps are dim and the light oozes down sickly and yellow. I can feel my heart almost bursting in my chest, the taste of something sour and unpleasant in my mouth. I’m running as fast as I can. I have to get away.

The moon is a sickle moon. Its cheek is pockmarked with acne scars. It looks down on me; it hangs overhead like a malformed knife. They’re running behind me and they’re gaining. They’re not even running hard. They spread out around me, they match their pace to mine, easily, without effort. They whisper my name: Ellie, Ellie.

Suckered by the title and that killer illustration (by Greg Ruth), I printed out this fun little horror story to read on my lunch break yesterday. Not too shabby. “Selfie” is fast-paced and creepy, and classic in a Stephen King sort of way (though I’m sure he’d have done it in triple the word count). Basically, it’s exactly what I want from Tor. Read it here.