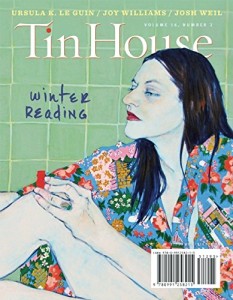 G., who is dead and obsessed with Susan Sontag, makes a pilgrimage to her childhood home in the desert.

She hated the desert but no matter, the desert had her in her formative years. The desert is irreducible and strange and it is not merry, it is never merry. Not even the baby roadrunners and javelinas know how to play. It is work work work. Hopeless living work. G. pictures her as a little girl — he carries a snapshot of her in his mind — a little girl ferociously unhappy and intense, kicking rocks in the desert.

Actually, I’m not sure G. is dead. We’re told flat-out that he is, but we’re also told soon after he farts that dead people don’t fart, so. There’s a lot I’m not sure of after reading this story. Actually, I read it twice, to try to make sense of G.’s dim, ghostly existence. It’s possible many of the answers I seek could be learned by consulting a Susan Sontag scholar; this story’s strangenesses could very well be references. I saw her speak once, but read very little of her work, and have only a faint understanding and admiration for who she was. As usual, hamfisted Googling has produced only strange hints at a clearer picture.