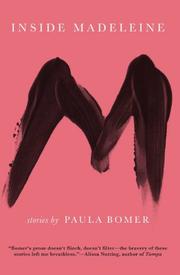 A young woman awaits release from the anorexia-ward of a hospital.

Here in the ward, we outnumber them. They may walk around with charts and fancy white outfits, but we’re all starving to death. Sure, the IVs fatten us up for awhile, but then we go home. Then we resume life as we know it. Life is a battle of will. And we’re winners.

That’s why people fight us. No one likes to see a young girl win.

“Eye Socket Girls” is the first story in Bomer’s third book, Inside Madeleine, which was released in May by Soho Press. I’m a longtime fan of Bomer’s. She writes so well about women, the expectations of being a woman: “We’re supposed to be nice, well behaved things. Pliable, fearful things that cry a lot, especially when we have our periods. I don’t get my period anymore. I haven’t bled since I was fourteen.” It makes me remember how much it sucked to be a girl: growing breasts earlier than my friends, realizing that I would BLEED every month for the next four decades, the constant worry over getting fat. What a whole bunch of suck. And a lot of it never really goes away. I like my breasts, at least, now. And it can be fun making people uncomfortable with period-talk. So there’s that.

Paula Bomer is unrelenting. She deserves more readers. You should be one of them.

You can read “Eye Socket Girls” here. And here is her website with links to reviews and interviews and such. I’m going to read the next story now.