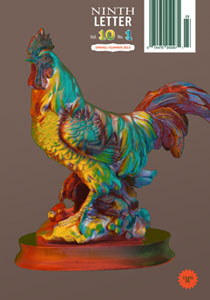 A prepubescent girl surprises herself with her actions.

In your memories of childhood, aren’t you mute, and isn’t this odd? I can never remember what I said, or to whom, or in what tone. One remembers the things done to one, the accusations, threats, perhaps the presents given, or some tickle of praise–but never, really, one’s response.

I liked this story a lot. It’s categorized as fiction, though it reads much more like nonfiction, particularly in certain instances (like the above passage). The story is about a young girl who is taken by her sister to her sister’s boyfriend’s house, where much older people sit around kissing, drinking, and watching TV. The girl ends up doing something inexplicable to herself and the others, which I won’t give away here.

I like the prose in “The River” very much. It’s smart and a bit challenging in places, yet totally readable. I’m really interested in stories about childhood, whether the narrator is looking back on her childhood or experiencing it in real time, and this story is able to capture so much of that TV-and-babysitter era.

I’m a big fan of Ninth Letter. Each issue has a unique and interesting design; it’s a literary magazine as well as an art project. The art never gets in the way of literature, though. I think you should subscribe.