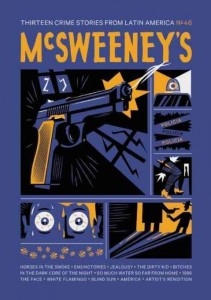 Mexican police have some murders and accidental deaths to clean up.

Maybe I’m just not used to the way crime stories work, but I had read this one twice to make sure I had a handle on what was going on. Some people are murdered. Some are killed accidentally. There are old guns and interesting pens (most of which are describe as being what they are “nothing more”). There’s a really dirty part, and some political machinations I’m pretty much in the dark on. And there’s a bit of soccer. A goalie scoring a header is about as rare as a litblog embedding a soccer video. I believe this is the goal mentioned in the story:

This is from a semi-recent McSweeney’s issue collecting “crime stories from Latin America” that’s been sitting on my desk for a little while. I’m intrigued. I liked this story. It surprised me on every page. Sorry, couldn’t find a link. Here’s more on Juan Pablo Villalobos.