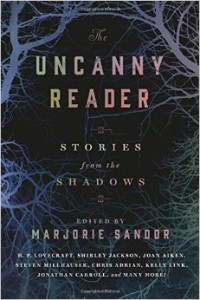 A weary traveler waits for his next train in a bitterly cold room and sees people who are not there.

(from The Uncanny Reader)

Against such interventions of fate as this, reflected Edward Pendlebury, there was truly nothing that the wisest and most farsighted could do; and the small derangement of his plans epitomised the larger derangement which was life.

This is the first time I’ve read anything by Robert Aickman, though I’ve been searching for his stuff for awhile (musicians I respect have sung his praises, or made references, at any rate). I’ve seen a couple of his reissued collections on Amazon, but have yet to run across a copy in a used shop; an original cover appeals to me.

Now that I’ve read “The Waiting Room,” I’m more intrigued than blown away. Where I wanted a twist, there was something more rote, and while some parts were inventive or charming, others were less so. I counted three instances of things “waxing” in this story, though there may have been more, and it seemed conspicuous. And some descriptions sprawled as if we too were Pendlebury, helpless but to wait around and bear witness.

Still, I like the way I think this man thinks. I read this one sentence  several times to unpack its meanings, which became less apparent once I finished: “Those seated upon the table were unmistakably of to-day. Though mostly young, they appeared to be old friends, habituated to trusting one another with the truth.” It’s an interesting thing to observe about apparitions, especially ones who exist but do not act in any meaningful way. I read that sentence again and feel like Morel.