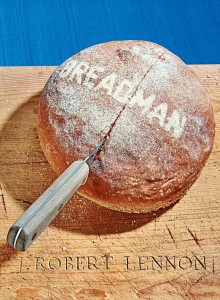 A husband waits in line to buy focaccia from his wife’s favorite baking guru, the eccentric and popular Breadman.

None of them looked at their phones. I did, because I was by myself, and because I lived most of my life at a distance from the things and people I loved. It was also a quality of mine that I invariably became the terminus of any queue I joined.

This story cracked me the hell up. So many snide little lines. I envision the narrator as a bewildered Louis C.K.-George Costanza hybrid, a troubled and snarky everyman obligated to play along with the Breadman’s ridiculous theater just to pick up some bread for his sick wife. The Breadman, meanwhile, isn’t necessarily a villain — just smug as all hell. He’s an artisanal baking genius and charismatic guru (he’s also maybe 5 percent Soup Nazi); you’d be smug too.

You can read this story, or have it read to you, here, and I say go for it. There’s also a decent interview with the author. If I’m going to read 100 short stories this year, as I tell myself I’m aiming to, I’ll need to start chipping away at the stack of New Yorkers on the coffee table. So much overdue homework.