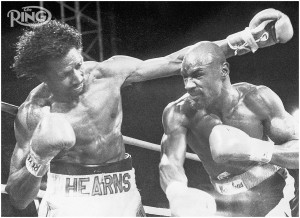 A junkie decides he’s going to write a children’s book and goes looking for a publisher.

(from The Paris Review)

Classic American story: I was out of money and people I could ask for money. Then I got what the Greeks, or even the Greek Americans, call a eureka moment.

I would write a book for children about the great middleweight Marvelous Marvin Hagler. My father had been a sportswriter before he started forgetting things, like the fact he had been a sportswriter, so the idea did not seem crazy. Probably it’s like when your father is president. You think: if that fuck could do it.

Why Marvelous Marvin Hagler? He was one of the best of his time, my time, really, the time I was a boy. His marvels meant something to me. Why for children? Children were people you could reach. You could really reach out and reach them. Plus, low word count. That meant I’d get the money faster. I was experimenting with unemployment. I was no longer experimenting with drugs. I was more in what you’d call an implementation phase.

I love the way this story takes it for granted that I’m interested enough to figure out what’s going on, that it doesn’t stop to explain every little thing. It just keeps chugging along fast, to keep up with its wandering narrator and his wandering thoughts. This is what I’d hoped I find when I tried to read a Philip K. Dick novel (the name of which escapes me). Maybe I’m talking out of my ass here, but I think drug culture, in the hands of a good writer, can have a dystopian quality, the feeling that there’s this harsh system out there built for everybody but you, pushing you into the margins. This story’s beautiful, with a healthy respect for its tragicomically flawed subjects. Read it here.